How will Human protect Privacy when Machines can Read Minds?

Brain-Decoding Technology is another big thing that will happen to the world.

In the months following the 2009 presidential election in Iran, protests erupted across the country. The Iranian government violently suppressed what came to be known as the Iranian Green Movement, even blocking mobile signals to cut off communication between the protesters.

They or I knew to quickly steer the conversation to other topics. All of us understood what the consequences could be of a perceived dissident action. But I still wish I could have known what they were thinking or what they were feeling.

What if I could have?

Or more frighteningly, what if the Iranian government could have?

Would they have arrested them based on what their brains revealed? That day may be closer than you think. With our growing capabilities in neuroscience, artificial intelligence and machine learning, we may soon know a lot more of what’s happening in the human brain. As a bioethicist, a lawyer, a philosopher and an Iranian-American, I’m deeply concerned about what this means for our freedoms and what kinds of protections we need.

I believe we need a right to cognitive liberty, as a human right that needs to be protected. If not, our freedom of thought, access and control over our own brains and our mental privacy will be threatened.

the average person thinks thousands of thoughts each day. As a thought takes form, like a math calculation or a number, a word, neurons are interacting in the brain, creating a miniscule electrical discharge.

When you have a dominant mental state, like relaxation, hundreds and thousands of neurons are firing in the brain, creating concurrent electrical discharges in characteristic patterns that can be measured with electroencephalography, or EEG. 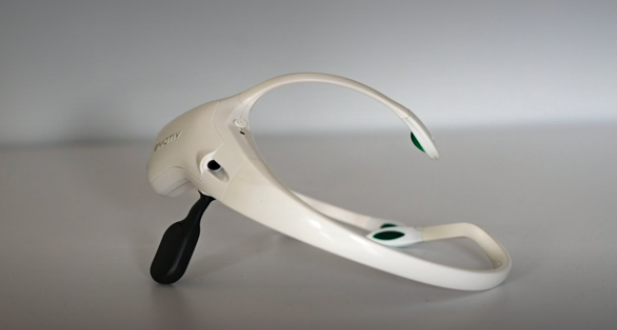 To share this information with you, I wore one of the early consumer-based EEG devices like this one, which recorded the electrical activity in my brain in real time. It’s not unlike the fitness trackers that some of you may be wearing to measure your heart rate or the steps that you’ve taken, or even your sleep activity.

It’s hardly the most sophisticated neuroimaging technique on the market. But it’s already the most portable and the most likely to impact our everyday lives.

This is extraordinary. Through a simple, wearable device, we can literally see inside the human brain and learn aspects of our mental landscape without ever uttering a word. 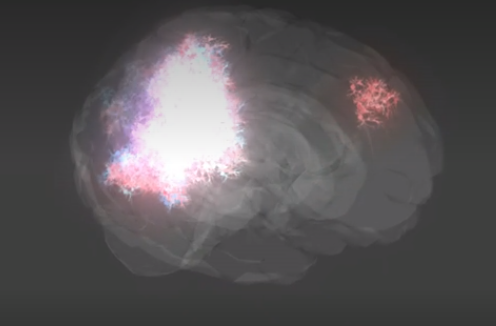 While we can’t reliably decode complex thoughts just yet, we can already gauge a person’s mood, and with the help of artificial intelligence, we can even decode some single-digit numbers or shapes or simple words that a person is thinking or hearing, or seeing.

Despite some inherent limitations in EEG, I think it’s safe to say that with our advances in technology, more and more of what’s happening in the human brain can and will be decoded over time.

Already, using one of these devices, an epileptic can know they’re going to have an epileptic seizure before it happens.A paraplegic can type on a computer with their thoughts alone. A US-based company has developed
a technology to embed these sensors into the headrest of automobilies so they can track driver concentration, distraction and cognitive load while driving.

Nissan, insurance companies and AAA have all taken note. You could even watch this choose-your-own adventure movie “The Moment,” which, with an EEG headset, changes the movie based on your brain-based reactions, giving you a different ending every time your attention wanes.

This may all sound great, and as a biosciencist I am a huge proponent of empowering people to take charge of their own health and well-being by giving them access to information about themselves, including this incredible new brain-decoding technology.

But I worry that we will voluntarily or involuntarily give up our last bastion of freedom, our mental privacy. That we will trade our brain activity for rebates or discounts on insurance, or free access to social-media accounts … or even to keep our jobs.

In fact, in China, the train drivers on the Beijing-Shanghai high-speed rail, the busiest of its kind in the world, are required to wear EEG devices to monitor their brain activity while driving.

According to some news sources, in government-run factories in China, the workers are required to wear EEG sensors to monitor their productivity and their emotional state at work. Workers are even sent home if their brains show less-than-stellar concentration on their jobs, or emotional agitation.

It’s not going to happen tomorrow, but we’re headed to a world of brain transparency. And I don’t think people understand that that could change everything. Everything from our definitions of data privacy to our laws, to our ideas about freedom. In fact, in my lab at Duke University, we recently conducted a nationwide study in the United States to see if people appreciated the sensitivity of their brain information.

I worry about the ability of our laws to keep up with technological change. Take the First Amendment of the US Constitution, which protects freedom of speech. Does it also protect freedom of thought? And if so, does that mean that we’re free to alter our thoughts however we want?

Or can the government or society tell us what we can do with our own brains? Can the NSA spy on our brains using these new mobile devices? Can the companies that collect
the brain data through their applications sell this information to third parties?
Right now, no laws prevent them
from doing so.

This is a stage presentation on Ted Talk byNita A. Farahany.She is a leading scholar on the ethical, legal, and social implications of biosciences and emerging technologies, particularly those related to neuroscience and behavioral genetics.